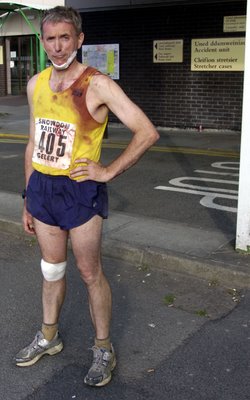 I love running and it can't get better than this!

Yesterday during a fast descent after Lord Elliott on Snowdon I hit the ground like a speared duck. Broke my jaw and mangled the shoulder I broke in April. (I've since found a number of other interesting bits - some of it hillside I took home!)

A small price to pay for sharing a bivi with four (young) concerned women for 2 hours. Having every whim acted upon without question. Nearly getting a helicopter ride. (Regular updates were received about where it was in various parts of Wales, obviously it was homing in on us by landmark). Having a ride in the engine of a mountain-train whilst the driver of thirty-years explained how dull the job could be. Same sheep apparently. Eating a curry through sealed lips, drinking copious amounts of beer on drugs.

And the best bits, relying on friends..Simon did a cracking job of marshalling resources and taking over (had plenty of practice) and I'm now glued, zapped, poked and prodded from Wales to Derby. And thanks to Dave for putting up two smelly runners in Wales.
Posted by Gary McMahon